Mangroves—the woody perennial plants in the coastal intertidal zones—are often overlooked, just as we do with most of nature’s gifts. “Mangroves are magical forests where we discover nature’s secrets. They straddle the connection between land and sea and nature and humans. Mangrove forests nurture our estuaries and fuel our nature-based economies,” says Anne Birch, marine conservation manager at TNC Florida.

Mangroves have deep roots that help bind soils, slow down water flows, and stop coastal erosion, so they play a cardinal role in the ecosystem and protect the lives of inhabitants of coastal areas. Furthermore, the network of mangroves improves water quality and the ocean’s ecosystem by soaking large amounts of carbon dioxide emissions and other greenhouse gases from the atmosphere, locking them for millennia in their carbon-rich swampy areas.

The most extensive dry-climate mangrove forest in the world exists in Pakistan; it encompasses an area of about 600,000 hectares near the Indus Delta. Because abandoning nature could have harmful repercussions, Pakistan Flying Labs initiated a mangrove project with the above frameset in mind.

The main challenge was that the local communities, the Sindh forestry department, and funding agencies needed a reliable and fast mechanism to monitor mangrove growth and their species and quickly identify plant health issues. Mangrove forests play a vital role in combatting climate change and facilitate the marine ecosystem in the surrounding area of Karachi. In addition, the mangrove swamps, creeks, and mudflats serve as a breeding ground for a diverse variety of marine life along the Sindh coastline, such as mussels, oysters, shrimp, and fish, which move offshore as they grow. Some species of migratory birds, too, use the swamps as wintering grounds.

This ecosystem is badly impacted by increased industrial waste, port activities, and urbanization. Hence there has been this challenge for combating the risks of depletion of mangroves forest in the Indus delta. The conventional methods of mangrove health assessment done by the Sindh Forestry Department entail conducting on-site ground surveys making them expensive and time-consuming. It is also impractical to examine all the mangrove plants in the Indus delta using traditional methods, as only a few areas can be monitored using conventional techniques.

Pakistan Flying Labs partnered with the Government of Sindh, Sind Forestry Department, VTOL Dynamics, the local community, and the renowned climate experts Dr. Hammad Gillani & Afia Salam and initiated our Mangroves Monitoring Pilot Project. This project focused on the mangrove forests in the Indus Delta, which are spread across the coastline of Sindh Province. The project sought to map and assess different species of mangroves and identify the gaps for better plantation drives. We planned a methodical aerial mapping of mangroves for this project using drone technology.

Using the imagery data captured from the drone, we considered:

On August 28th, our team met at the Sindh Forest Ministry Department to prepare a strategy for effective mapping. Later that day, our group jaunted to the Indus Delta with our pilot and our DJI Mavics (both Mavic Pro2 and Pro). The Sindh Forest Ministry provided us with all the logistic support, especially their boat, which we boarded at Korangi Fisheries Harbour Authority, Karachi, to begin our journey to the Indus delta. With the cool breeze and crashing waves, it seemed like we arrived there in no time.

Our spirits were lifted by the refreshing sight of mangroves extending far and wide. However, the most thrilling section of the project began here when our Mavic pilot filmed the complete aerial view of the mangroves, delta, friendly animals, humpback dolphins, and hornets. After completing our flights, our captain directed us toward Korangi harbor, considering the food we had consumed and the time we had spent in the middle of the Arabian Sea. 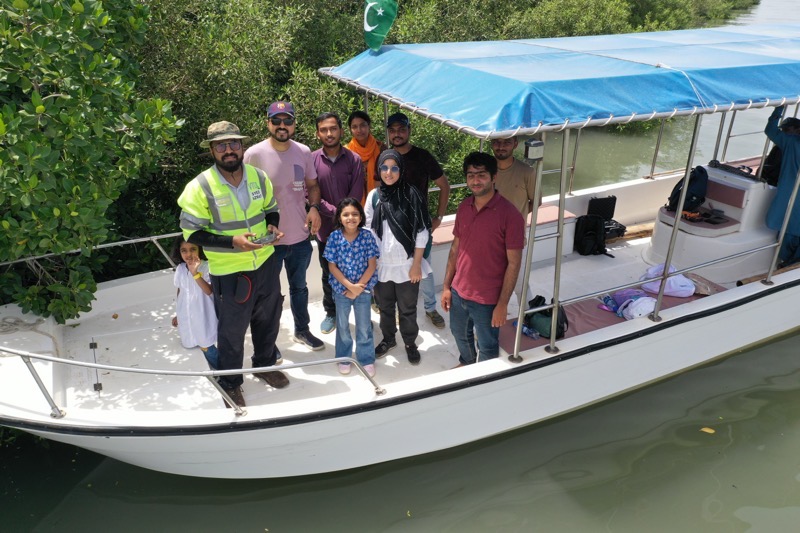 The Sindh Forestry Department was moved to adopt drones to monitor the mangrove forest and show their keen interest in using drones for plantation drives. Furthermore, they expressed their desire to work with the Pakistan Flying Labs team for a follow-up flight to assess the success of the interventions and possibly take on a periodic arrangement of monitoring works using drones on the mangrove forest. The officials of the Sindh Forestry Department were impressed by the images collected through drones and requested the capacity building of their staff for conducting similar surveys. Discussions were held with the stakeholders about plans for periodic monitoring of mangroves in the Indus delta and assessment for other similar projects using drones.

We want to extend special thanks to Werobotics and Flying Labs and all our stakeholders for supporting us throughout this project. This pilot project will open a new era for using drones in combating climate change and contribute positively towards the SDG goals at Pakistan and Global levels.