Uganda ranks seventh worldwide in coffee production and second in Africa after Ethiopia. Uganda contributes three percent of the global output of both the Arabica and Robusta varieties. Coffee is the country’s biggest export crop. While most countries typically harvest coffee once a year, in Uganda, there is a different harvest period, which ranges from November to February, and the fly crop from June to September.

Due to climate change, coffee is highly vulnerable. Rising temperatures and increasingly erratic rainfall are already exposing trees to more pests and diseases and decreasing both the quantity and quality of the crop. Furthermore, the COVID-19 pandemic has affected the high yield because most farmers have faced challenges in smooth cash flow to support their activities for good yield outcomes. In addition, commercial and rural farmers often lack access to essential equipment like fertilizer, irrigation, and high-quality seeds; finance, agricultural training, and market data; and infrastructures like paved roads and processing facilities.

For funders and UCDA to mitigate the risks of poor yields and repayment on agriloans, there was a need for adequate real-time data to address appropriate decision making or rapid response to aid farmers before they lose all the crops, ultimately affecting our economy.

Therefore, Uganda Flying Labs took advantage of the offer of the microgrant for Turning Data Into Action by the use of multispectral and RGB drones to capture images that would help spot crop health problems a human eye can’t see, ranging from plants under stress due to a water or fertilizer shortage, or pest attacks, to save a coffee plant from premature death and ensure high coffee yields per acreage. Depending on their overall health, plants reflect different amounts of visible green and NIR light, and drones can spot these variances.

This was a win-win for farmers, exporters, and lenders to maintain a good ecosystem through drones. In addition, conclusively, Lenders and Governments can use the data to quickly intervene in a turnaround time through the use of GIS tools that were used to view and understand data on crop stress, soil health, water use, and quality, and dozens of other metrics, all put together into an intuitive, easy-to-understand interface.

UAV data was aimed at minimising for the Uganda Coffee Development Authority and lenders: 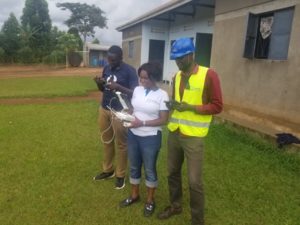 Through the WeRobotics Microgrant program, Uganda Flying Labs took on the mantle of applying robotics technology in agriculture for yield loss for coffee farmers in Uganda from the monitoring perspective. Conventionally, monitoring of crops is carried out by on-ground physical inspection by the farmers or experts (agricultural support staff deployed by the government). However, this is often expensive and time-consuming, and the assessments are done only in sample areas, which may not be fully representative of the situation in the entire region. Additionally, due to such limitations, such inspections and interventions happen on an intermittent basis, when there is an absolute need, that is to say, when the damage has already been done, leading to fewer yields than the potential maximum, for example, when there is an outbreak of a disease or pest infestation.

We had several stakeholder meetings with the bank and UCDA to refine the scope and find the most optimal position for relevant data output and sensitization. UCDA was keen on comparing both methods of cropping that is intercropped coffee with the shading of banana plants and the coffee trees that were planted independently. This would help them to use the results to decide on best practices for different terrain. With the time not on our side, we were given an option of a commercial farmer who had both types of farming methods on a rocky and hilly piece of land in the south of Kampala in Mukono called Ventura farm.

The Uganda Coffee Development Authority, a government agency responsible for maximizing coffee yield production, export, and quality control in the country, received the proposal for a joint venture with delight. As a national body concerned with reporting figures of yield, they were particularly interested in seeing how this technology could help in estimating yields nationwide and efficiently address factors limiting improvements in those yields and, subsequently, exports. At the same time, the bank looked forward to the potential to strengthen relationships with their clients by facilitating informed decisions making with timely and targeted interventions to maximise return on investments (loans given to farmers).

Our focus was on the Robusta Coffee species suitable for low-altitude areas and tropical climates within the Victoria basin. In a matter of hours, we were using the DJI Phantom 4 Multispectral drone (with an RGB camera and five monochrome cameras). The drone covered 44 Hectares in half-day as we repeated the process with another drone. Not to say that it was flawless fieldwork. We had rain chase us away twice in one day. Determined, we waited and attempted again. By the time we got to the end of the day, we were body battered. Therefore, we returned to the farm for the second day with another drone because the Mavic Pro RGB camera had failed to execute our mission plan. Technical glitches can be humbling during fieldwork. Many thanks to the pilot who tirelessly applied every software until we broke through. Flabbergasted is the word that comes to me when I think of the mad rush to acquire data with the assumption that the drone would work on an android platform. The beauty is that the farming community was not aware of our pressures. They just saw busybodies.

On return to our desks, a digital surface model, Reflectance maps for the various bands, and a 3-D Point Cloud was produced. After further processing, more results, such as the Digital terrain model slope map, and NDVI maps [an indicator of crop health] (in ArcGIS Pro), were generated.

The RCNN Masks deep learning model found in ArcGIS Pro software was used to detect coffee crops on the farm with the provision of samples. The model was able to detect over 7000 stands. The tool proved useful for inventorying and helped develop further analysis. 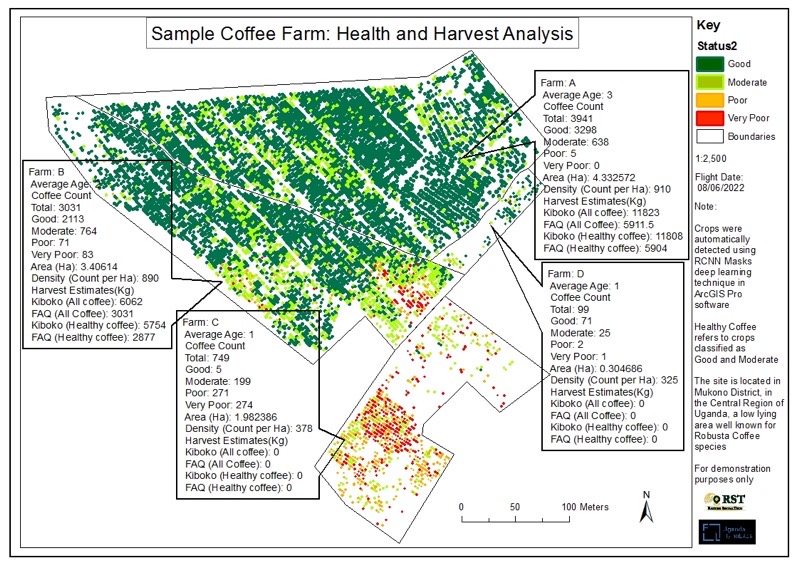 With these identified stands overlayed with the NDVI map, each crop’s status was assessed, indicating areas with stress. Also, with a known number of crop stands, harvest estimates were calculated based on a mature coffee tree’s expected yield per year. On the site that was flown, an estimated harvest of about 8500kg of green beans (dried coffee beans without husks) was in an area of about 7.5Ha.

Using a Digital Terrain Model, the data could also assess erosion and flood risks. Contour maps contributed to the farmer’s thinking of how to construct his drip lines. While harvest analysis has given a good picture of the expected volume of yields, understand the number of trees that need to be replaced. For the bankers, this type of data helps to know if the agriloan is likely to afford to repay in time or if there is a need to support. The risk of erosion has to be mitigated with the help of UCDA to the farmer. Techniques on how to retain soil on slopes and restore nutrients.

The solutions from the data attained are numerous. The sky is the limit for the mitigation plans. As I conclude with a grin on my face, I am confident that coffee farmer production will be on the increase as they embrace rapid solutions through drone technology and accomplish much more for our economy.

The results of this analysis were received happily by all the participating stakeholders, who now had an insight into what they could accomplish with the technology of UAVs. They promised to engage further with the team at the Flying Labs for more exercises regarding agricultural applications.

It was also an exciting journey of learning for the Uganda Flying Labs team that had delved into the uncharted waters of applications in precision agriculture with the use of drone data imagery.